Acts of God, Government Overreach, and How They Affect You

Acts of God, Government Overreach, and How They Affect You

Hi, there. Chris Carrington here. I’d like to talk about an issue that puts Colorado agriculture businesses at risk.

I live in Colorado, and the agriculture industry here is thriving. Production is dominated by livestock, specifically, cattle. Drive beyond Denver and it won’t be long before you come across a feedlot. There is a saying around here that “that” smell wafting 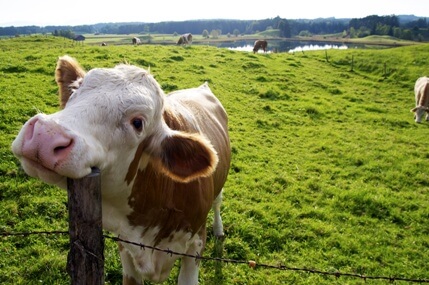 in from the plains is the smell of money. Of course, it’s also the smell of manure. Feedlots produce a lot of manure. And because of this, they’re regulated by the Colorado Department of Public Health and Environment to ensure all that manure doesn’t do things like pollute the environment and end up in our drinking water. To accomplish this, feedlots will backhoe it out of the cattle pens and deposit it into wastewater impoundments. These are reservoir systems that the State requires be built to withstand a 25-year flood, and typically they’re made up of four or five ponds which all flow downhill. The manure is filtered as it flows from one pond to the next. Don’t get me wrong, you would not want to brush your teeth with the water that ends up in that last pond, but it is cleaner than what you started with.

I represent a feedlot that the Colorado Department of Public Health and Environment (“CDPHE”) inspected in January of 2015. The CDPHE took a look at the feedlot’s reservoir/wastewater impoundments, pointed out a few minor issues and said that, once those were addressed, the lot would be compliant with state law. The feedlot made the repairs, and when the CDPHE came back in March, it gave the lot a clean bill of health, noting in writing that the feedlot was compliant with state law.

A few months later, in June of 2015, the area received a massive rain and flood event — the kind that comes along once every 50 years. As the rain came down, one impoundment on my client’s lot is said to have overflowed. That water allegedly traveled to a nearby ditch, which then met up with a nearby culvert, which met up with a bunch of other ditches and culverts. Three and a half miles later, the water went into a river. After the storm, 379 dead fish were found in the river. Colorado Parks and Wildlife took that number, extrapolated, and said that the actual number of dead fish was 14,000. An individual living nearby claimed to have seen the water overflowing from the feedlot into the river. Parks and Wildlife considered the case open and shut.

The AG Picks a Fight

In most cases, if manure flows off a feedlot and contaminates a water source, State law says that the feedlot is liable and can be penalized by state regulators. But there’s an exception to the law that says as long as you’re in compliance, you won’t be held responsible if the discharge is due to precipitation. In this instance, the feedlot had just been told by CDPHE that it was in compliance. Nonetheless, the Attorney General sued my client for supposedly killing over 14,000 fish that nobody has ever seen, will ever see, and which likely never existed in the first place. Because the AG could not pursue my client for a discharge into the river (because of the exception noted above), the AG claimed the feedlot unlawfully “took” the fish from the river – an “unlawful taking”, a violation listed in Colorado law among criminal offenses. An unlawful taking is what they call it when someone shoots a bald eagle or kills an elk out of season or over-fishes their license. The AG made sure to point out to the court that the feedlot didn’t have a fishing license that permitted taking 14,000 fish out of the river. Where fish are concerned, unlawful taking carries a per-fish penalty. In this case, the trial court imposed a fine of $625,000.

We challenged the AG, but the trial court determined that an “unlawful taking” is strict liability such that it did not matter whether the feedlot intended to “take” any fish or not. What is more troubling is that the AG was using criminal statutes to squeeze money from local businesses that just happened to have the bad luck of being caught in the middle of a storm. And while this incident just happened to concern a feedlot, it could happen to any company that uses the land to run its business. Here, all it took was some unusually bad weather, and the fine came in at over half a million dollars. Some businesses may be able to afford that. Many won’t. And then they won’t be in business anymore.

The question at the center of all this was: Can an entity be held liable for an unlawful taking when that unlawful taking is the result of an act of God, or does that “unlawful taking” have to be deliberate and purposeful? Let’s say you put up a fence that a moose calf later gets stuck in and dies. Strictly speaking, under the trial court’s ruling, that’s an unlawful taking.

Would the government be willing to take you to court over something like that? Let’s say you work in the energy industry and maintain netting over an oil pit, and then a bird finds its way through the netting and dies. You were in compliance, but the bird still died, and the AG decides to hold you responsible. Let’s say you’re a rancher and a coyote gets caught in barbed wire on your property. Now you see that this is something that could affect any industry in which land and wildlife intersect. And as the intersection of land and wildlife becomes more common, this problem is only going to get bigger.

Thankfully, the trial court’s ruling was reversed by the Colorado Court of Appeals, with a three-judge panel finding that, to be considered an unlawful taking, the feedlot would have had to have killed those fish knowingly and voluntarily. This was something the Attorney General couldn’t prove and hadn’t even accused the feedlot of doing. In fact, the AG had acknowledged the fact that the feedlot’s wastewater impoundments were in full compliance with state law.

The appellate court’s commonsense ruling is good news for agribusiness all over the state, but there is no guarantee we won’t see another case like this one in the future. What happened has the potential to affect us all, down to the consumer of meat and dairy products, who will pay higher and higher prices to cover the insurance and legal fees required to keep pace with the increasing potential for liability arising from Acts of God, such as the rain event described above. If the government sees that enough people are taking notice and taking this seriously, there’s a good chance they’ll decide in a way that benefits local businesses and local communities. Call us and let’s talk about what you can do to help keep Colorado a commonsense place to do business

If you have questions or concerns about the law and how it intersects with the local agricultural industry, Richards Carrington can help you. Contact us at 303-962-2690 and let’s talk.